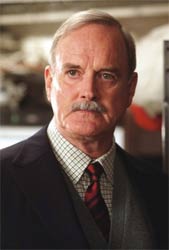 Let me start off by saying that I love John Cleese. I’m a huge Monty Python fan, and Cleese would be playing the physicist Dr. Barnhardt in the upcoming The Day the Earth Stood Still remake.

Here’s why: In my experience, the way you make a hokey classic SciFi movie great–and contemporary–is to take the subject matter seriously. Look how Ronald D. Moore chose to remake Battlestar Galactica, a laughably silly 70s show. He took the basic elements of the original and crafted them into an idea that was modern–and chilling. In the world of comics, author Brian Michael Bendis did the same thing with The New Avengers, taking the idea of a Kree-Skrull war, which was pure cheese in its day, and turning it into a sort of modern day Cold War.

Cleese is a comedian. This tells me one of two things: He will either be basically reprising his role as “R” in the last two Pierce Brosnan Bond flicks–which would make him the silly scientist more apt for Tim Burton’s Mars Attacks! than for a serious reboot of DESS. (Coincidentally, Pierce Brosnan played the silly scientist in Mars.) Or he tries to play the role straight, a la Jack Black in King Kong. Do I even need to continue with that line of thought?

Until now, I was pretty impressed with the casting choices for DESS, which included Keanu Reeves (I don’t care what you think, I say he’s a decent actor), Kathy Bates, and Mad Men’s Jon Hamm. But this latest development make me wonder. I’m not saying the film is destined to be terrible, I’m just saying I’m nervous.

To share your thoughts on SciFi remakes, go to SciFi Scanner’s new Talk forum, and enter for a chance to win the original The Day the Earth Stood Still on DVD.