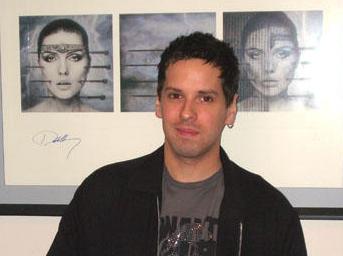 While working at the Playboy Studio in Santa Monica, California is hardly anyone’s idea of a nightmare, one mustn’t neglect one’s dark side– that’s why Associate Editor Robert DeSalvo interviews Playmates by day, but is a serious horror fan by night.

DeSalvo (not to be confused with Albert DeSalvo, the Boston Strangler) is used to fielding questions about his job. “There are a few that always come up,” he says, “‘Have you been to the Mansion?’ ‘Is Hef really involved with the magazine?’ ‘Can you get me into a Mansion party?’ The answers are: ‘Yes,’ ‘absolutely’ and ‘no.'”

DeSalvo’s love of horror runs deep: “I’ve always been into folklore, superstition and myths, and the horror genre is just a modern way of telling those old campfire stories.” While he’s personally looking forward to this summer’s sequels to Hellboy and The X-Files, DeSalvo recommends the following in the meantime:

“Alien is a triumph of directing, acting and design, plus it’s truly nightmarish. Ridley Scott has an unparalleled eye for detail and captures the sense of isolation the crew of the Nostromo endures. I can’t think of a scarier movie monster or one so brilliantly conceived as the one birthed from H.R. Giger’s twisted imagination.”