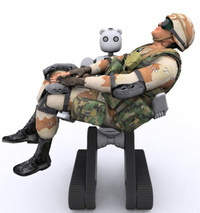 Largely thanks to smartypants scientists with a God complex who can’t leave well enough alone, each year sends us speeding ever faster towards the robot apocalypse.

You can’t say science-fiction hasn’t warned them about fitting their robots with servo-controlled muscles capable of crushing a man’s head like a watermelon, or laser beam eyes that can hone in on the sexual organs from 500 meters away. But scientists keep on doing it anyway, making questionable advances in the field of robotics that can only have one end: The subjugation and ultimate destruction of the human race by cold, logical titanium overlords who have classified us as a virus.

That’s why when I saw Cosmos magazine’s list of their Top 10 Favorite Robots for 2008, I wondered which one of these seemingly cute and snuggable machines would be the progenitor of the revolution that would have my brain stomped out of my ears later this century. Will robots in the 40th century somehow stumble upon the dusty remains of the Internet Archive and study this list with fond curiosity, like an archeologist cradling the australopithecan skull of Lucy in his hands in the desert of Ethiopia. "Ah, yes, ASIMO: the first robot to crush a human’s skull between its hands. How much we owe him!"