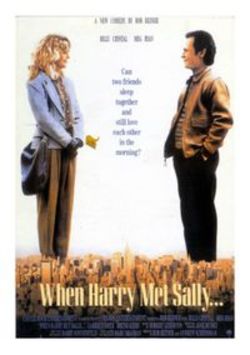 Just as Mary Poppins can be remixed into a horror trailer, so can When Harry Met Sally. Could Billy Crystal’s Harry be a stalker—even a serial killer? This YouTube clip shows that indeed the film could have been edited into something terrifying. That’s partially because Crystal is often seen running after Meg Ryan in the romantic comedy. Chasing someone can be interpreted as sweet love or a violent obsession. In fact, there’s a fine line between both. Once you’ve crossed that line, watch out. It really becomes frightening when Harry says, "I think I’m entitled to throw a little anger your way." The maker of the remix even threw in Meg’s famous faked orgasm at Katz’s Deli for good measure. Love can be scary.