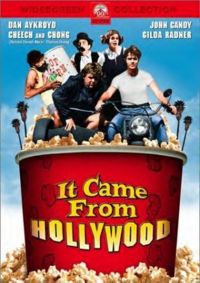 Before Mystery Science Theater 3000, cable TV’s best ironic viewing was a 1982 movie that was in heavy rotation on HBO: It Came From Hollywood, a retrospective of B-movies with wrap-arounds by Gilda Radner, John Candy, Dan Aykroyd and Cheech & Chong.

Their commentary covers everything from Monster movies to animal-attack films, and from stories about brains and alien invasions to bad movie musicals.

Looking back, the jokes aren’t all that funny–though it still makes me laugh to see a stoned Tommy Chong get the giant popcorn. (Stranger still is the knowledge that the stars panning these awful films would go on to make movies like Haunted Honeymoon and Blues Brothers 2000.)

According to IMDb, It Came From Hollywood was based on Harry and Michael Medved’s books The Golden Turkey Awards and The Fifty Worst Movies Ever Made — the authors hated the finished movie and later wrote about it in their book, The Hollywood Hall of Shame.

Regardless of what Harry Medved thinks, this is a significant movie
for me. It introduced a generation of latch-key kids to classic Sci-Fi
films such as The Tingler, I Was a Teenage Frankenstein, Attack of the 50 Foot Woman and Plan 9 from Outer Space.

It Came From Hollywood won’t be released on DVD due to
copyright issues (it features clips from more than 90 films) and the
video is out-of-print. Thankfully, a righteous YouTuber named Mrcharrio
posted the film earlier this month. Watch it online here.

And check out this episode of The SciFi Department looking at The Worst Sci Fi Movies Ever.