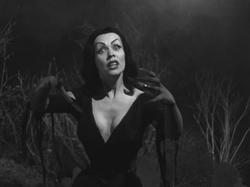 Matt Kiernan’s recent post on Vampira’s death drove me straight to YouTube. Perhaps a few videos will help you in your grieving process, too. The first clip, a vivid montage set to garage rock, is most notable for one giant Vampira billboard standing about five stories tall. The second video, shot in a foggy graveyard, shows Vampira with her long nails ready to attack. The third and best is a rare interview with Maila Nurmi in which she tells viewers how the character was a way for Nurmi to escape the poverty and anorexia that plagued her as a young woman. In the interview, she’s an older woman, but there’s still the sparkle of youth (or of evil?!) in her eyes.