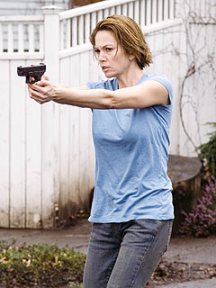 It was a lean week for horror movies, but we saved you the choicest cuts of reviews for the new serial killer movie Untraceable. You may want to throw popcorn at the screen–but you’ll probably update your Web security settings when you get home.

“The film presumes that its audience is terrified of all things Internet, a place where even an innocent computer game can hide a security-penetrating, potentially life-destroying program.” –Keith Phipps, The A.V. Club

“Lane has quite a role here. Her task, in scene after scene, is to look at a screen and register horror. The gradations of horror increase, starting at anonymous-furry-creature horror, and eventually graduating to oh-no-is-that-my-dear-friend horror.” –Mick LaSalle, The San Francisco Gate

“It’s an involving movie, well-acted and fast-paced. But you may need a shower afterward.” –Jack Mathews, New York Daily News

“Naturally, Lane is partnered with a male detective (Billy Burke, in
a standard-issue performance), but, to the writers’ credit, there’s not
a hint of sexual attraction between them.” –Kamal Al-Solaylee, Globe and Mail