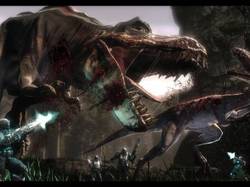 The Turok franchise has been around since Rex Mason illustrated the first comic back in 1954. After star-crossed Acclaim acquired the video game license in 1997, its Nintendo 64 game rocked gamers’ worlds with dinosaurs and fast-paced, first-person shooter gunplay. Sadly, Acclaim ran the series into the ground, and by the time the fourth iteration was released, no one cared anymore.

Fast forward to 2008 as the Turok series rises again via Touchstone Games. Yes, the first person shooter genre is well-worn but even so, as evidenced in this GameTrailers video, the dinosaurs come at you suddenly, sometimes when you’re on a mission that has nothing to do with ghastly prehistoric reptiles. Where else can you fight against small dinosaurs with your bare hands and a knife? Touchstone has made all the right moves—like getting Propaganda games for development and Ron Perlman for voiceover. We’ll see if the pieces of the puzzle fit as well as they should when the mature-rated game hits stores next month. Stay tuned.