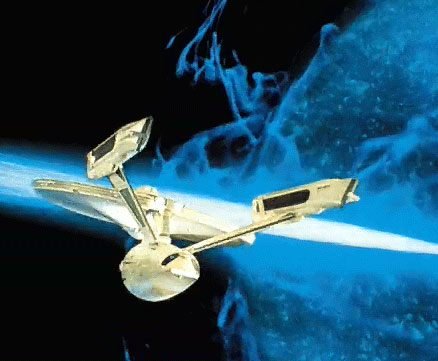 In many ways, I’m not a very good science fiction fan. If asked about how the warp nacelles of a Starfleet vessel works, I don’t start slavering at the mouth: It could all run on magic and rainbows for all I care. Despite the presence of the word “science” right in the name of the genre, I don’t require the science in my sci-fi to be plausible. I like sci-fi for its aesthetic and philosophies more than I do for the ultimate plausibility of the solutions it presents.

Which is why I’m not pushing my spectacles up on my nose and nebbishly correcting Trek XI writer Robert Orci about the wildly implausible science behind his recent explanation to TrekMovie.com about how and why the USS Enterprise was constructed on Earth, as revealed by the most recent trailer.

The Enterprise being constructed on Earth has apparently been extremely controversial among mouth-breathing dorks, who think that the USS Enterprise must be treated and assembled like a flimsy yacht in the gravity-less vacuum of outer space. Orci tries to explain this all away with totally made-up technobabble about how the Enterprise can sustain itself within gravity wells, and while I know that Orci knows just as much about constructing a space ship as I do (which is essentially limited to what I have read off of the back of Cracker Jack boxes), that’s good enough for me. Your mileage may vary, though.