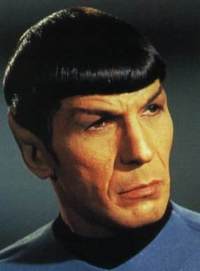 For slash fiction enthusiasts, this is a heady prospect: not one, not two, but three Spocks on screen at once in J.J. Abrams’ Star Trek XI. Will they be clones or just look-alikes? Will they be younger or older versions of one another? And, most importantly, will they make out?

On that final question, chances are slim, thanks to the Puritan moguls of Paramount. But there will, at least, be three separate Spocks in the next Trek movie, according to the first and foremost Spock himself, Mr. Leonard Nimoy.

All I can say is that I hope they introduce a fourth Spock: Zombie Spock. Star Trek has always missed the taint of zombie-ism.