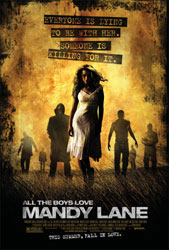 Cautionary tales are at the core of so much horror. Drinking, drugs, and pre-marital sex regularly get their comeuppance from masked, machete-carrying maniacs in classics like Halloween and Friday the 13th . But All the Boys Love Mandy Lane turns that idea disturbingly on its head. The first ten minutes of the film (now on Yahoo! UK) reveal a horde of teenage boys lusting after the title character but when she rejects one over-sexed, bleached blond suitor and he just can’t take it anymore, he proves his love by jumping from his roof…after being cajoled by a jealous buddy of hers, that is. Who needs a masked villain when you have raging teenage hormones to drive you to your own untimely end? All the Boys Love Mandy Lane was filmed in 2006 and floated around the festival circuit. It’s looking at a March 7 release date. Will it survive?