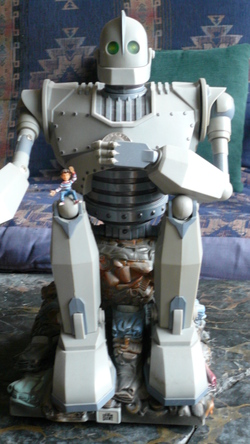 Back when I was a tech and gadget columnist for Entertainment Weekly, there were tons of things that would come in the mail for review. One of the few toys worth keeping was The Iron Giant bank. At a towering 20 inches, the Trendmasters offering didn’t sell well when it was released (probably because not that many people went to see the now-classic animated movie with Vin Diesel as the Giant). As it creaks and growls, its green eyes light up and its clunky left arm slowly moves money into a hungry, gaping maw. But it’s the fine craftsmanship of the toy that makes it a keeper. From mechanics which have never failed to the detailed junkyard at his feet to the loving, sculptured look of Hogarth in his hands, it’s a work of popular art that’s now a rare collector’s item. Heck, even the nine-year-old batteries still work. At some point, would you Scanners like me to shoot a video so you can see I.G. in action?