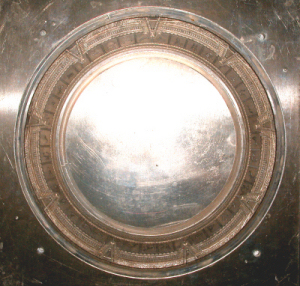 Many of us — when wandering up to the refrigerator looking for a cold drink — have idly wondered about exactly what happens beyond the ice cube maker door. I mean, we reach out, push our hands past the portal and grab ice cubes on the other side. What technology explains that?

Guys like me are satisfied with the answer of our forefathers: it’s magic, stupid. Others believe an entire race of doubtlessly Scandinavian Lilliputians toil away endlessly inside, chopping up glaciers with their miniscule pick axes. But others are convinced there’s an even more intricate explanation: the ice cube maker door leads to another world.

It’s a sound theory: I subscribe to a similar one myself to explain exactly what happens when I flush the toilet. But one crazy Stargate fan just took that idea and ran with it, creating a quasi-Egyptian portal mechanism that, when twisted and dilated, may open his Frigidaire Stargate to a world besides the Ice Cube Planet. Perhaps one full of luscious, promiscuous nymphs, if the television show is to be believed.

That in and of itself is a laudable goal, except the opening of his ice cube maker is far too small to climb through even if he does find such a planet. Still, no point in giving up: even a glory hole to a planet of sexually omnivorous sylphs is worth pursuing.