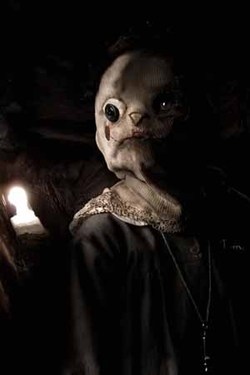 Though it’s not being promoted as a horror flick, the Spanish film The Orphanage, which opened nationwide this weekend, has a lot to recommend it for fright fans. Though the promos of this unsettling ghost story emphasize the participation of producer Guillermo del Toro, the work itself is the brainchild of first-time director Juan Antonio Bayona and writer Sergio G. Sánchez. Both Bayona and Sánchez grew up addicted to classic horror films with Sánchez admitting to being influenced  by The Omen , Rosemary’s Baby , and The Tenant . (A pivotal scene with a psychic investigating the titular orphanage clearly pays tribute to Poltergeist .) And the homages aren’t limited to scary movies with high-end pedigrees either. You’ll see nods to Friday the 13th and Flowers in the Attic . The more gruesome scenes seem intended to shake up the arthouse crowd to which the movie is being marketed. Given that this is Spain’s official entry for Academy Award consideration, this is one horror film intent on being taken seriously.