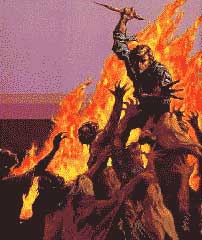 When I first heard that Warner Brothers would be adapting Richard Matheson’s genre-defining apocalyptic infection novel, I Am Legend, I reacted similarly to how Moses might have had a drunk Ramses II puked on the Ten Commandments. Now that I’ve actually seen the film I can say authoritatively that its terrible, with a nonsensical ending that totally cheapens the epic grandeur of both the title and the original novel. It’s not even redeemed by what famed film critic Pauline Kael once memorably described as “transcendent comical suckitude.”

While you’re mentally inserting obscenities and profane hand gestures before the adjectives of my hypothetical film review, I would like to make one additional comment. In I Am Legend, the filmmakers took the rather bizarre tact of not actually casting any vampires, but making them all CGI which looks stupid and fake when some latex and colored corn syrup would have been better. But that’s not the point. The real point is that for some reason, the filmmakers decided that where a vampire’s mouth would normally be, they would make a toothless hole controlled by a rapidly flapping jellified jaw. The end result? A lot of bellowing vampires whose roars make their mouths quiver and flap but who can’t even bite you. They’re Goatse.cx vampires. I Am Legend redefines the critical definition of a toothless film.