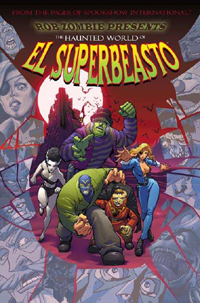 Rob Zombie is not one to be pigeonholed. When he’s not rocking out, he’s directing horror flicks–and getting pretty good at it, too. The Devil’s Rejects showed that Zombie had a promising future in horror. Then Zombie surprised us with a pretty good Halloween remake. His next trick is El Superbeasto, an animated film based on Zombie’s comic book, “The Haunted World of El Superbeasto.”

“It’s just a lot of sex and drugs, and violence…that is good! [laughs] I think we need a cartoon like that. It’s like those 70s cartoons, like Fritz the Cat and stuff like that. I play this guy, Dr. Satan, who is trying to take over the world and may be gay, or.. something. I don’t know,” Paul Giamatti explained during an interview in 2006 that was posted on the El Superbeasto MySpace. According to that same MySpace blog, Zombie posted last Friday that he has now turned his full attention to the adult-oriented animated film that pits El Super Beasto and his sultry sidekick Suzi-X against the crazy plots of Dr. Satan.