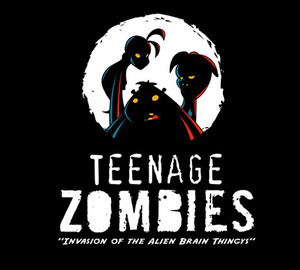 If you’re a fan of the over-the-top, B-grade horror movies of the Fifties, you’ll want to check out the trailers for Teenage Zombies: Invasion of the Brain Thingys. Game Trailers has four trailers for the upcoming Nintendo DS game in which kids try to stop an invasion of aliens who have brains so large, they appear hydrocephalic. If the campy humor and cute monsters aren’t enough for you, the robust game play featured on the popular portable device will be. The teen zombies have some Beavis and Butthead on steroids abilities as well. Says Darren McGrath of InLight Entertainment in Totally Video Games interview, “Fire puke, a vacuum cleaner, and HUGE skateboard wheels are a just few of the power-ups.” One of the angst-ridden zombies loves basketball, but when he shoots hoops, it’s with gooey brains, not balls.