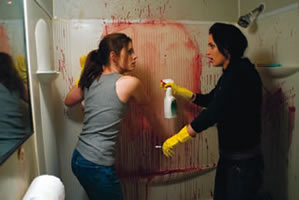 Female Filmmakers are making a strong showing at the festival this year. Amy Redford’s directorial debut has opened to largely positive reviews; last night, we spoke with Marianna Palka, who produced, directed, wrote and starred in the excellent film Good Dick; and today we turn our attention to Christine Jeffs whose dark comedy Sunshine Cleaning concerns two women who specialize in cleaning up the blood and body parts at various crime scenes.

“This movie is…a little bit of everything,” said 24‘s actress Mary Lynn Rajskub to CinemaBlend. “There’s sort of humor throughout, even though it’s a dark subject matter. The characters are interesting and complex, but it’s not an over-the-top drama by any means.”

For Rajskub this film marks two firsts: her first trip to Park City, and also the first time she’s played a homosexual: “It was new for me to play a gay character,” she said. “But working with Emily we just had a great time immediately. It was very comfortable.”

Blunt attributes the comfort on set to working with both a female director and a female screenwriter: “I loved the female sensibility and the female understanding,” the actress told Entertainment Weekly. “Christine has done a lot of drama, and she was great for those kinds of scenes. She would give you notes that would take you to a whole new place–she understands how girls work, and you really needed that for this film.”