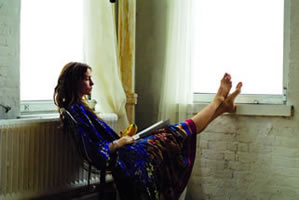 Speaking at the official opening of Sundance last Thursday, Robert Redford told a group of journalists, “You’ll see a lot more levity in the festival this year. The world is so insane right now, it’s so dark and crazy…the more personal the stories are [it] seems to be a way for filmmakers to get a grip on what they can do about things.”

Perhaps he was referencing Martin McDonaugh’s dark comedy In Bruges, which opened the festival to mostly positive reviews. Or he could have been referring to his own daughter’s directorial debut, Guitar, which follows a terminally ill woman (Boston Legal‘s sultry Saffron Burrows) who decides to spend her remaining days fulfilling her desires, which include buying herself extravagant gifts and learning to play the electric guitar. Cancer is uplifting, you ask?

“When I read the script I fell in love with it immediately,” the young Amy Redford told the Deseret Morning News. “It wasn’t predictable or false, and it had a real honesty and beauty.” In an interview with the New York Times, Redford explained that Burrows’ character is someone who “hasn’t put a premium on her own happiness, who is not inhabiting her own life. [So] she indulges herself in things she’s denied herself not as a greedy impulse, but because [now] she’s feeling worthy.”

Amy knows all about feeling worthy. “There’s an obvious assumption that my film would get in automatically because of my last name,” she told Deseret. “But I promise that I did go through the same submission process everyone else did.”

And what does dad have to say? “I’m here as her dad and to support her as a dad,” the Winnipeg Sun reported. “I’m happy to say she’s here on her own drive.”