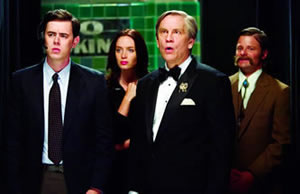 Several films at this year’s festival are focused on the movie business itself. Shootout recently spoke with William H. Macy about his film The Deal, in which he plays a Hollywood producer trying to make a film about Benjamin Disraeli. Then there’s The Great Buck Howard, Sean McGinly’s plucky comedy about a law school dropout (Colin Hanks) who gets a job as personal assistant to a has-been celebrity (John Malkovich). Throughout the course of that film, Hanks’s character witnesses the effects of fame as Buck confronts his own ego and delusions in an effort to recover some name recognition.

“The longer you’re in [show business] it can mess with your mind,” Hanks told Cinematical, discussing the take-home message of one of Sundance’s lightest offerings thus far. “I think at the core of the movie, what’s interesting is that Buck is always thinking too highly of himself, so when he gets the fame back, it’s for all the wrong reasons.”

Emily Blunt, who co-stars in Sunshine Cleaning (which also premiered at Sundance 2008), plays Buck’s exasperated publicist. To be a publicist, she explained, “you have to have a thick skin and you have to have a lot of patience…Valerie is suitably shocked when she turns up and has to deal with this has-been when she’d rather be with George Clooney.”

As is likely the case with the rest of the actors in the film, Blunt needed to look only as far as her own personal experience to inform her character. “I’m surrounded by the world of PR agents and managers,” the actress said. “And those moments that I’ve laughed about with my friends I’ve taken and encompassed into my character. I mean my publicist is my friend, and so I know from him how demanding [the job] can be.”

But despite its digs at Hollywood ego and publicist bureaucracy, Hanks promises the real goal of the film is to entertain, not make a point. “At the beginning, the curtain opens, and you have this beautiful story, and it’s light and it’s fun and it makes you laugh and smile,” he told Entertainment Weekly. “And in the end the curtain closes and you go, ‘Omigod, that was fun.’ That was it.”