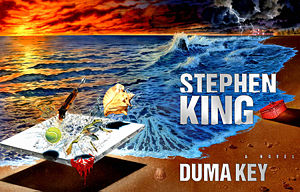 Stephen King’s Duma Key is a novel of localized dread and fear, much of which takes place on a deserted island off the west coast of Florida. Some say King is doing his best work right now. Others contend that he’s been hit or miss since The Stand. A perusal of 25 reviews online shows that in this instance, King hasn’t lost his touch at all. The only spoilsport of the bunch was a critic at the London Telegraph who says the story “starts promisingly but descends into an overlong, self-indulgent stinker.”

Yet the rest, every publication from The New York Times to the Sarasota Herald-Tribune, say that King has found a brand-new flavor of horror by changing the locale from Maine to Florida. The shift makes sense as King has  been wintering in Florida for over a decade. While he’s admitted it’s taken him quite a while to get a grip on what the state is all about, it appears that, with Duma Key, he’s spot on with his insight about everything from moaning sea shells to the burgeoning art scene in Sarasota.