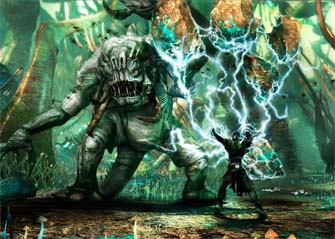 It just may change the nature of gaming. When the LucasArts video game, Star Wars: The Force Unleashed is released this summer for for Xbox 360 and PlayStation 3 systems, you’ll play as the apprentice to Darth Vadar, out to destroy all the Jedi in the universe. It’s a sweet hook, but what’s really important is the game play. In this Gametrailers making-of video, it’s clear the software engineers went the extra mile to create artificial intelligence that’s almost scary in its breadth. The three game mechanics spoken about in the segment make the characters and their environments live, breathe and react in ways that until now have not been seen in games. So for the first time, a Star Wars offering makes you feel like you’re living, playing and shooting inside Lucas’ vast universe.