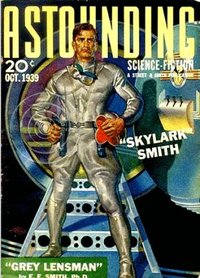 In the annals of comic book plagiarism, there is perhaps no more shameless rip-off than the silver age Green Lantern. Oh, it’s a great idea: a race of blue aliens so technologically advanced as to seem utterly magical, handing out magic rings to particularly noble individuals and charging them to fight evil throughout the galaxy. Unfortunately, it’s not an original idea: It was purloined wholesale from E.E. Doc Smith’s famous Lensman series.

Now it looks like the Smith estate might want to beat DC Comics to the punch: With comic book adaptations in vogue and a Green Lantern big screen update consistently rumored, Smith’s grandson, Al Trestrail, wants to make sure his grandfather’s take on an intergalactic superhero league hits screens first as Sci-Fi Wire reports that he is currently negotiating optioning rights on the Lensman series.

I’ve never read the Smith books, but I’d love to see a Lensman film. The six Lensman books take place over billions of years of history, which is a particularly rich tapestry from which to extract a new Hollywood film franchise. Plus, I like to root for the little guy, and even though Smith’s Lensman series "inspired" films like Star Wars, he’s just never gotten his Hollywood due.