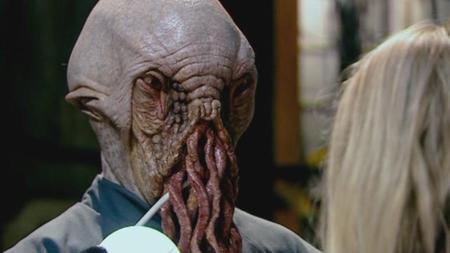 I’ve been repeatedly invited to join SETI@home—a project that allows you to allocate spare CPU cycles to search for extraterrestrial radio wave signals—roughly every other week. I always turn down the offer. Given the choice, I’d much rather lend my CPU cycles to a cause such as the search for a cure for cancer, which would do far, far more to increase human happiness and well-being than detecting the faint echo of a tentacle monster’s sqwork on the other side of the Milky Way.

But there’s another reason I’m cautious about SETI: I’m not too keen on the idea of informing said tentacle monster that there’s a planet full of hooting monkeys ripe for intergalactic enslavement.

Apparently, I’m not the only one worried about cluing in malicious
aliens to Earth’s helplessness via the installation of a SETI
screensaver: Iván Almár has invented the San Marino Scale, a method of
assessing the risks we incur via deliberate transmissions from the
Earth to other stars. Luckily, it seems like the risk of attracting
hostile xenomorphs is about the same as the risk of actually detecting
anything, which professional statisticians have officially measured as
one in a billion-jlllion.