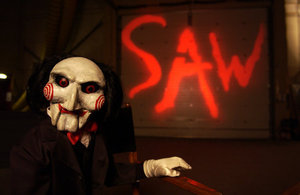 Jigsaw for the Xbox 360? This morning, there’s news of a Saw video game to be released in 2009. It seems that Brash Entertainment, a company formed to make games exclusively from other media (like movies), is hard at work on the project. Susan Arendt at Wired GameLife says that a Jigsaw puppet announced the news at a press event and that “The game is due out for 360 and PS3 in October 2009 (in time for Halloween, of course), and will thread its way through the plots of the films. The studio will be collaborating closely with the developers, so the game should at least look and sound just like the movies.”

Most movies turned into games are complete junk. Yet the thoughtful Arendt says the puzzles and the many life-threatening situations in the movie series could make the film work perfectly as a game. But she hedges: “It could end up just being a collection of lame minigames that kill in spectacularly horrible ways if you fail, which would be rather disappointing.” The truth: It’s too soon to tell. But I don’t have a good feeling.