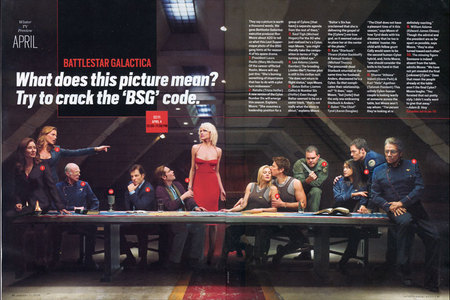 A supposedly spoiler-filled promo picture for the upcoming season of Battlestar Galactica has been released by Entertainment Weekly… despite the fact that no one’s even sure that the half a season they’ve filmed of BSG will be aired in 2008. The promo shot apes Da Vinci’s Last Supper, but the poses the characters are in allegedly reveal the plot twists of the upcoming season.

The characters in the image who really interest ares Sharon and Helo. According to series creator Ronald D. Moore, these two are warily looking at someone who is "definitely reacting." At first, it appears that they’re watching Tyrol, but Moore then goes on to say that Tyrol’s brandished knife relates to his half-Cylon baby. Then who’s holding their attention?

My guess is that it’s the new Number 6 on the far left: Natalie. She’s not gesturing at her doppelganger at center; she’s pointing at Lee and Helo. Trace the eye lines: That’s the only interpretation that makes sense. Given Moore’s claim that the new Number 6 leads a previously unseen faction of Cylons, she’s pretty committed to the belief that human-Cylon hybrids are unholy and must be destroyed. Hence Tyrol’s brandished blade.