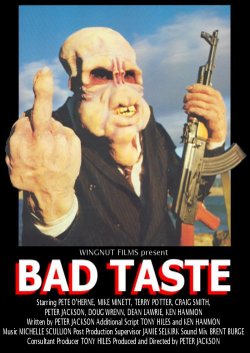 Like many other great directors, Peter Jackson caught the bug early on. For his first full-length feature (the very bloody Bad Taste), he struggled with a day job while shooting footage every Sunday for three years. Only then did his campy sci-fi flick about aliens who harvest humans end up in the can.

Over at the SciFi Dept, AMC’s Kevin Maher does a bang-up job of explaining how and why this first Jackson film is more important than his upcoming feel-good horror flick, The Lovely Bones. Check it out on this, the 21st anniversary of the movie, and you’ll see that raconteur Maher is kind of our own Jean Shepard . Just be warned: The exploding sheep is gross.