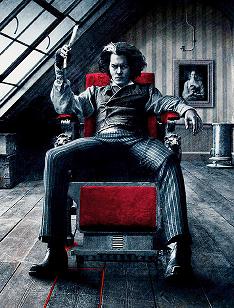 When the Oscar nominees were announced at 8:30 a.m. EST, the Academy once again showed its disdain for horror movies. Of the main categories (picture, director, actor, and actress), only Johnny Depp garnered a nod. Sweeney Todd, which won a best motion picture Golden Globe, should have (at the very least) secured a nomination for its director Tim Burton. This movie was a stellar achievement, an apex that Burton’s not reached since his equally great Ed Wood (1994). And though it was a small movie, Stephen King’s The Mist was a brilliant adaptation that should have merited some recognition for its writer-director Frank Darabont. You can trot out the old sports adage, “Well, maybe next year.” There’s nothing wrong with hope. But judging from the Academy’s previous record, horror will be overlooked once again in 2009.