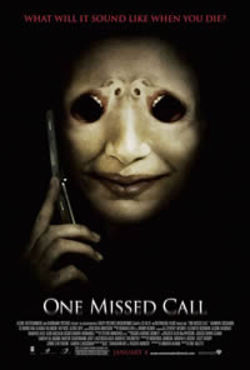 And the reviews are in!  The bad news? They’re all bad.  The good news? Bad reviews are fun to read.  Here’s what critics are saying about the J-horror remake One Missed Call:

"They must be members of the ‘Can you kill me now?’ plan." —Rick Bentlet, Miami Herald

"The only advantage to an early January release is that pretty much everyone will forget about it when they’re making their ‘Ten Worst’ lists in December." —Kevin Carr, Film School Rejects

"A filmed version of the party game where a spoken message is passed from player to player until it’s gobbledygook." —Colin Covert, Star Tribune

"The CGI-enhanced finale ends before it really has a chance to get started, trailing off as if admitting defeat." —Michael Gingold, Fangoria

"Some angry specters have figured out how to deal with savvy horror-film characters who know not to pick up the phone: Leave messages!…Maybe the ghosts are out of anytime minutes and don’t want to get stuck on a long, awkward call with the people they’re trying to kill." —Alex Markerson, E! online