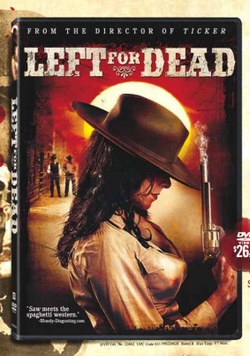 Nearly every horror fan goes through a phase where he or she feels a compulsion to see every horror film ever made (regardless of quality) from Leprechaun to Motel Hell . Direct-to-DVD releases are like the meat substitutes when that need to consume scary slop arrives so Left for Dead might earn its place in some novice’s bad movie marathon after it’s released on March 4 (according to DVD Active). Billed as "Saw meets the spaghetti western," the film is helmed by director Albert Pyun of Jean Claude Van-Damme’s Cyborg and Steven Seagal’s Ticker. Gunslingers against demons? Maybe the rationale is detailed in Pyun’s audio commentary on the DVD.