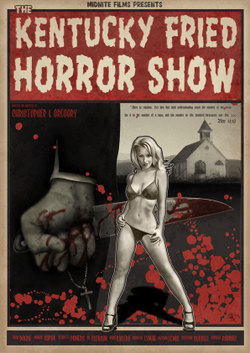 KFC slaughters 850 million real life chickens every year, but apparently they draw the line at gore on film.  C.L. Gregory’s slasher movie The Kentucky Fried Horror Show hasn’t even begun filming yet, and he has already run into trouble with the venerable patriarch of fast-food poultry.  Apparently the movie’s artwork and website look to be a real appetite-killer.

Though KFHS doesn’t have anything to do with KFC, that hasn’t stopped the latter from sending a letter threatening a lawsuit and stating their intention that this film never sees the light of day.

Gregory mentioned in a Fangoria interview
that the letter doesn’t just lodge an complaint against his movie, but
against horror films altogether:  “This is the first time that a
corporation has literally stated in a written letter that they intend
to censor a privately funded film simply because it’s a horror movie.
They stated that they had no issues with a comedy film [John Landis’
1977 cult fave The Kentucky Fried Movie received no flak from the chain], but they detest horror."

Gregory doesn’t seem to be fazed by the threat, planning to continue
production as scheduled.  While it’s obvious why KFC would protest an
unsavory association with murderous hilbillies, their ire has all but
guaranteed that more people than ever will hear about this movie and
want to see it.  KFC may want to rethink their approach.  If there’s a
secret ingredient to instant publicity in showbiz, it surely isn’t
eleven herbs and spices.