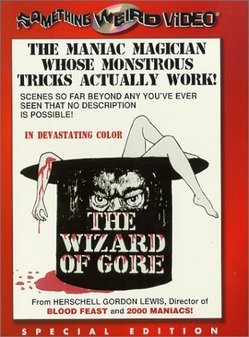 Although Juno isn’t a horror movie, the title character drops a bomb of a Dario Argento reference and then declares that Herschell Gordon Lewis’s Wizard of Gore "is better than Suspiria ." As a horror fan that’s a tough pill to swallow, especially since the smarmy teen makes the proclamation after just 15 minutes of the schlock horror classic. Yet shedding light on a lesser-known fright flick is always good for the genre. What Little Miss Juno didn’t know is that a remake, starring Crispin Glover and Brad Dourif, hits theaters later this year.

The new version made the rounds at festivals (including Cannes and the L.A.) but hasn’t been picked up for distribution. The story sticks to the original premise about a magician who brutally saws his assistants in half then shoves swords down their throats with no visible harm—until they show up dead later from similar wounds. This time around, however, the movie’s also a murder mystery. Suddenly that Juno-esque reference proves prescient: a sly advance recommendation that’s arrived to pique interest before the marketing machine kicks into high gear.