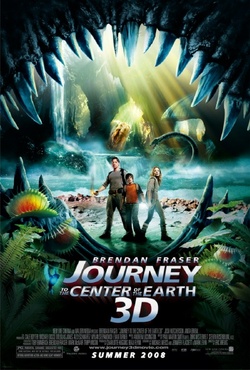 It isn’t the sci-fi nature of Journey to the Center of the Earth that gets me going each time I watch the 1959 movie: It’s the monsters and dinosaurs. The makers of the new version of the film seem to think monsters are the best part of the movie, too judging from this just-released poster. Will they walk into the belly of that fanged beast (which, strangely, seems to be growing Venus fly traps)? You have to love the fact that this adventure epic based on the Jules Verne novel will be made in 3D IMAX. And call me peculiar, but I’m a fan of lead actor Brendan Fraser’s work in The Mummy and even Monkeybone. When the film launches on July 11, will you don the geeky glasses to check it out?