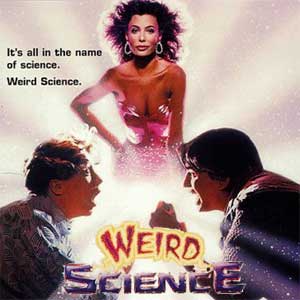 Remember that episode of Buffy The Vampire Slayer where Warren creates a robot girlfriend who goes berserk? If you don’t, you should: It was probably the stupidest thing Buffy ever did before the canonical Season 8 comics turned Dawn into a giant.

Well Joss Whedon has finally explained himself for that blunderful episode, and the reason may surprise you. In an interview with GeeksOn podcast, the show’s creator explained that that particular episode was fueled by his hatred for the John Hughes classic teen comedy, Weird Science .

“I hate Weird Science not a little,” he said. “I find it offensive. The boy fantasy of building a girl. Obviously, we were doing the nasty version of it, because I find it grotesque.”

Apparently, Whedon found the idea of building a female sex machine
so offensive that he kept said “Buffybot” around for an entire season
for Spike–probably the show’s most popular character–to hump.

I just don’t understand anyone who’d get in a tizzy about Weird Science.
It’s such a stupid, harmless, fun little film, and certainly isn’t
worth taking as seriously as Whedon is taking it. But then again, not
everyone’s idea of progressive feminism is watching a Valley girl named
Buffy say “like” a lot and punch a vampire with her fist so hard he
explodes into a puff of dust. God only knows what he thinks of the
recent DVD release of TV spinoff.