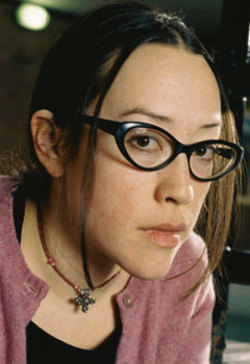 This morning, The Hollywood Reporter has news of negotiations that would bring director Karyn Kusama to Jennifer’s Body, the humorous horror film from Juno ‘s super-hot writing-directing team of Diablo Cody and Jason Reitman. Kusama (pictured) has one very impressive credential to her name: She directed Girlfight , which launched Michelle Rodriguez’s career and won the Grand Jury Award at Sundance in 2000. Unfortunately, Kusama’s next film was Aeon Flux . Oh, well. Here’s a chance for her to shine again. As you’d expect, the plot sounds funny: The Reporter describes it as being about "a cheerleader who is possessed by a demon and starts feeding off the boys in a Minnesota farming town." Add Transformers star Megan Fox to the mix, and you might, just might, have a horror flick with serious crossover potential.