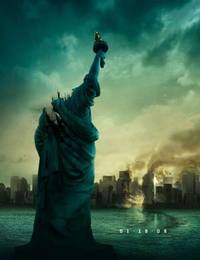 Over at the Fantasy and Sci-Fi Movie Lovin’ Blog, one of the writers has posted an anecdote about a news report they heard about Cloverfield on television.

According to a somber faced Neil Cavuto, the image is far too reminiscent of 9/11 to be accidental and must be a deliberate attempt on the part of the moviemakers to grab our attention and cash in on the imagery. They even went so far as to bring in a 9/11 widow to weigh in on the topic.

I think this all just flashes back to that Titanic Survivor last week complaining about the Doctor Who Christmas Special, asserting that it is disrespectful to use tragedy. In that case, it was an absurd claim that rightly got her laughed at, but with September 11th, a lot of ostensibly reasonable people will become touchy.

I understand that, but the bottom line is that we, as a culture, have a pool of shared experience from which art draws to get across its message, be it tragic or comic. Is Cloverfield’s poster evocative of September 11th? Certainly. And we all understand the numbing terror, uncertainty, and impotence we felt when the World Trade Center was attacked. It’s inevitable that someone would eventually use that for a giant monster movie set in New York. It’s certainly less offensive and exploitative than a token televised-melodrama-of-the-week. After all, those events were bigger than life.

Does This Have the Makings of a Controversy? [Fantasy & Sci-Fi Lovin’ Blog]