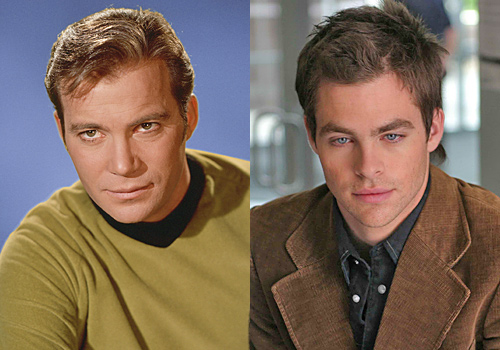 Ever since the announcement that the young and virtually unknown pretty boy / thespian Chris Pine would take over the role of James T. Kirk in the new Star Trek movies, Internet fans have been asking whether or not he’s got the chutzpah to take over for William Shatner. The answer to that question is “No. Absolutely not.” but no matter how you feel about Pine, you’ve got to have some modicum of sympathy for him: this is going to be a hard sell for Trekkies.

To his credit, Pine isn’t letting the pressure get to him, and he’s being smart, approaching Kirk as a fresh character instead of as a Shatner-esque vehicle of over-the-top eyebrow archings and wild gesticulations.

I think the biggest mistake I could ever do would be to try to re-create what Mr. Shatner did. There are certain qualities that Kirk has that are vital for someone who is a leader of men. And those qualities, I definitely wanted to take from what Mr. Shatner did in the original series. But my job is to take something new, to take that and build upon it, really do my own thing.

That’s a good attitude to have, but I think he nails exactly why I have such a sense of unease about him as a young Kirk where as Zachary Quinto as Spock doesn’t bother me at all: Pine looks like a pretty boy who has been able to just swish his eyelashes at people his entire life to get what he wants. He does not look like a leader of men.