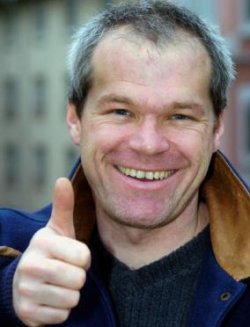 Who knew it was going to be Uwe Boll day here at Monsterfest? I certainly didn’t, but the recent postings by Tom and Harold have persuaded me to do what few in my position would ever do: Defend Uwe Boll. It’s a lonely job, but I’m up for it.

I’ve met Uwe a few times and he’s a really nice guy.  He’s smart, funny, and never at a loss for words.  As his infamous boxing challenge to his critics proves, he’s not afraid of confronting his attackers and speaking his mind. (He always gives a great interview.)  Last summer in Montreal, I witnessed him help out an injured drunk who fell down and hit his head, even calling the paramedics himself.  I couldn’t help but respect that.

Of course, the man’s movies are what people really dislike, but even there I can’t be too critical. I saw Postal and In the Name of the King at Fantasia last year. Neither struck me as bad at all.  Postal (his first comedy) is a more miss-than-hit movie but at least there’s passion behind it; In the Name of the King is just a silly adventure flick with some excellent action sequences. It’s not The Lord of the Rings , but who cares?

Boll’s got it in him to make a really good movie one day. My recommendation to him would be to stay focused on movie making instead of making deals. (Better scripts wouldn’t hurt either.)  You haters can hate all you want, but mark my words: One day, this guy is going to a film everyone likes and you’re going to have to find someone else to pick on.  Plus, you’ll owe him an apology.