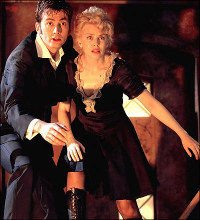 I have come to think of the rejiggered Doctor Who as a specific kind of unsophisticated trash with occasional moments of greatness. That’s not to say that I ever expected a Proustian take on time travel: it’s just that I’d like it to refrain from calculated, formulaic melodrama. And while some of the new Doctor Who stuff eschews this—in particular, the episodes written by Steven Moffat—it’s clear that Russel T. Davies plays upon the heart strings with all the subtlety of a phantom organist pounding out Haydn’s Organ Concerto No. 1.

In short, the new Doctor Who is both contrived and imbecilic. It’s not sophisticated or intelligent— the show never was—but now it’s maudlin as well. And no episode had me rolling my eyes at the tedious and rote melodrama more than the recent Christmas special, "Voyage of the Damned."

I won’t offer a real review, but I’d like to point out that everyone in "Voyage of the Damned" dies by falling in slow motion into a burning sun, accompanied by the swell of horns and an accompanying choir. The Doctor at one point is flown around by angels with actual halos glowing over their heads: This is meant to evoke the idea that the Doctor is some sort of Messiah, even as every one of the ancillary characters pretty much dies in an act of martyrdom. Talk about cheapening even that lame symbolism.

The Doctor runs into Kylie Minogue, she naturally falls in love with him within seconds, and we’re subject to 80 minutes of her making moon eyes at him. Then we get the final kiss and the invitation to travel in the TARDIS. But because Kylie Minogue’s not about to sign a contract for the fourth season, they have to write her out, re-using the same method they used to write Rose out of the series. Later, the Doctor is asked by an old man he’s palled around with for most of the special if the Doctor would mind if he traveled with him. All of a sudden, the Doctor travels alone: I guess the thought of flirting with a bald octogenarian through Season 4 didn’t seem very enticing.

I think Catherynne over at Pink Raygun summed it up best: "How is it remotely conceivable to become so wrapped up in your own cliches and tropes that you are a mere parody of yourself after only three years on the air?" Amen, sister.