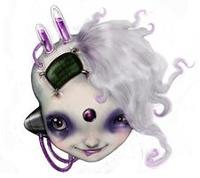 But what the heck is an io9? As editor Annalee Newitz explains:

"io9s were marketed as cheap time machines in the 2070s. They were actually just low-grade input/output devices for the brain that tuned tachyon waves and gave users vivid images of possible futures. The things were so addictive, and drove so many people insane, that io9s were eventually outlawed. Today the word is just slang. io9ers are the early implanters who obsessively upgrade themselves with beta tech. People who tweak out on buggy brainware are sometimes said to have ‘gone io9.’"

In other words, they’ve retrofitted a cool, unique sci-fi history upon the shortest domain name they could pick up on the cheap. I like them already.

Direct competition aside, I don’t mind saying that this is going to be a must-read for any genre fan. Annalee and I used to work together at Wired: she is quite simply one of the smartest, dearest girls in the world. And that pale, purple-eyed, bulbous-headed cyborg sylph they are using as a logo? Designed by my partner-in-crime, Eliza Gauger, who runs ectoplasmosis with me, a fringe art and culture blog.