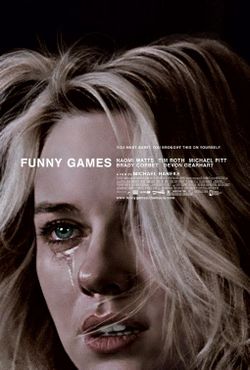 Perhaps the film at Sundance most likely to have a strong push-pull effect on audiences is director Michael Haneke’s English remake of Funny Games (starring Naomi Watts and Tim Roth). The movie has been called Hitchcockian, but it’s also ultra-violent.  You can see the film’s two clean-cut psychopaths terrorizing Watts and her family via four clips posted on Bloody Disgusting. The weighty words, the look in the eye, and the charming insouciance of the killers…it’s all hard to take. This truly mimics real-life terror, so much so that it feels inevitable for the film to get an NC-17 rating. So, are you going to see Funny Games when it hits theaters? Or will you pass?