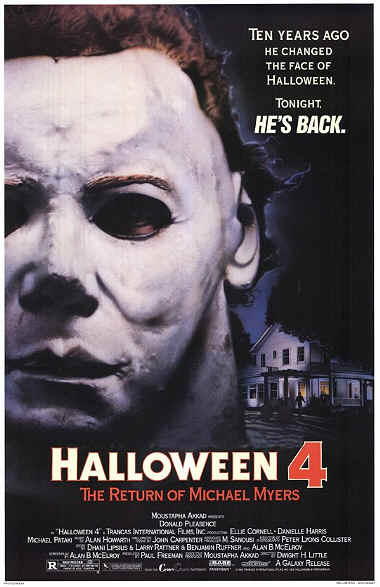 When will those silly teenagers learn that if they refrain from sex, drugs and alcohol, they’ll probably live through Freddy, Jason, Michael Myers, and anyone else Hollywood can throw at them? Hopefully, never. But we can credit the original 1978 Halloween, which cost only $325,000 to make, for quite unintentionally coming up with the rule of thumb for horror pictures that carried the genre all the way into the new millenium. This fourth iteration of the Myers franchise focuses on Michael’s return, after his absence from the third film. It begins with him comatose in a mental institution, ten years after his original killing spree. When his sister is killed in a car accident, Michael awakens, escapes, and goes on a rampage to kill his niece Jamie (not Lee Curtis). Though this film is only the fifth-highest grossing movie in the Halloween franchise, it’s also one of the most deliciously gory, thanks to special effects maven John Carl Beuchler, who was brought in for one day of extra blood scenes when it was decided the first cut was too “soft.” He added the seminal thumb through the forehead and redneck-head-twist scenes. Be sure to take note of Michael’s blond hair when he’s attacking Jamie in the schoolhouse: The producers had decided to use the mask from the original film, which was actually a redressed Captain Kirk mask, but over time the hair color had gradually changed too much and the idea was abandoned. That’s right, Captain Kirk was the original serial slasher. Is there anything he can’t do?