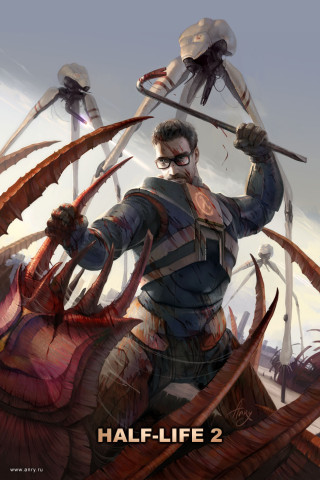 • Sarah Michelle Gellar thinks that Buffy can only work in episodic form. I’m not sure about that: Look what Whedon did with Serenity.

• The third most obnoxious character in Heroes gets his own wishy-washy new age site: Suresh’s Dream Study.

• George Lucas smugly spouts off through his beard about Indiana Jones and Star Wars . He seems to think that Phantom Menace’s box-office success isn’t indicative of him letting his fans’ expectations down, but of the film’s quality. Uh huh.

• The Cloverfield monsters gets its own action figure to play with during bath time.

• A giant, 8 foot tall Cthulhu for your pleasure.

• Gordon Freeman, the theoretical physicist from the Black Mesa facility, calls Coast to Coast AM to talk about all of the spooky experiences he’s been having lately involving the ominous personage of a serpentine administrator and sporadic teleportation accidents. What a paranoiac.