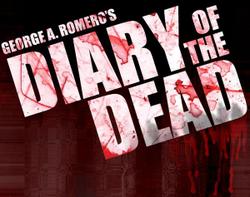 This time it’s personal: The trailer for George Romero’s newest zombie outing, Diary of the Dead, comes with a message from Uncle George himself announcing a contest for those of you who have your own short film to push.  The winning horror short will be included on the Diary DVD. (Admit it. Even just being buried among the Special Features would totally make your day.)

As for the trailer itself, it opens with video footage shot by a would-be documentarian after a crisis has begun to unravel civilization (a newscaster helpfully describes it as "Some sort of Armageddon…").  Turning his lens to the survivor drama indoors as well as the skull-munching action outside, his documentary is sure to be a better student-film than whatever he and his friends were working on before.

Any good?  We’ll have to wait and see.  Unfortunately, it seems to me a "Cloverfield-meets-Romero-knockoff" kind of affair.  While he doesn’t seem to mind being knocked off (he’s lent his original Dawn and Day screenplays to modern remakes), at this point the line between Romero and his imitators has become pretty blurred. What happens if this recent attempt to modernize his storytelling ends up a mindbending case of Romero imitating his imitators?  If you can watch this movie without your head exploding due to the layers of self-reference, then you may survive to enjoy Romero doing what he loves most—giving us a fresh helping of Armageddon.