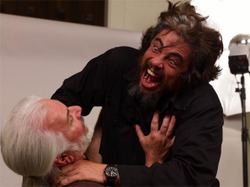 Ain’t It Cool’s Quint is reporting the rumor that two directors are under consideration to replace Mark Romanek on Universal’s The Wolf Man movie. Blogs Quint, “First contender is Breck Eisner, who was trying to get Creature from the Black Lagoon made. Second contender is Matt Reeves, director of Cloverfield, but my source doesn’t know if Reeves will be free because he’s supposedly working on not only Cloverfield 2, but is working on Invisible Woman with J.J. Abrams again producing. That was news to me, but it’s what I hear.”

Ain’t It Cool was actually the first to show photos of Benecio Del Toro as The Wolf Man, and, as you can see by reading farther in the AICN post, Quint was shocked that Romanek left. Everyone was. But since both directors named have other projects going on, who else could direct the film? How about Morgan J. Freeman, who just wrote me saying that he just wrapped Homecoming in Pittsburgh with Mischa Barton?