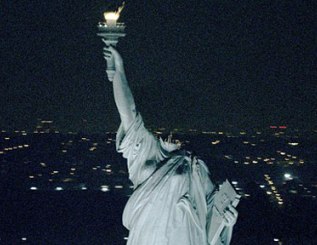 Cloverfield may have decimated its opponents at the box office, but the reviews tell a more complex story as critics split between those who felt it humanized its victims and revealed them as people you wanted to see dead:

“It puts human faces on the victims of mass destruction, faces that might easily have been yours or mine, staring down the maw of something we don’t understand.” –Keith Phipps,
The AVclub

“For all the boozing, posing and macking, these characters move around like walking MySpace profiles who don’t get any hits. By now, anyone who doesn’t dote on Gossip Girl will be begging for the monster to show up and stomp these annoying nonentities.” –Peter Travers, Rolling Stone

“Cloverfield harnesses the horror of 9/11–specifically as it was felt in New York–and repackages it as an amusement-park ride.” –Stephanie Zacharek, Salon

“Cloverfield captures the chronic self-absorption of the Facebook generation with breathless, cleverly recycled media savvy, and then it stomps that self-absorption to death. These days, that’s entertainment.” –Ty Burr, The Boston Globe

“Most of us like to get our money’s worth and actually see the monster flattening buildings, but against the odds, Cloverfield is a kick.” –David Edelstein, New York Magazine