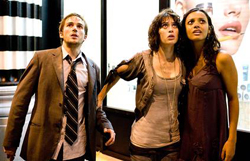 Ever since its massive MLK weekend take ($46 million), rumors of a Cloverfield sequel have been making the rounds. Talks between Paramount Pictures and director Matt Reeves, producer J.J. Abrams, and writer Drew Goddard are almost complete, reports Variety. But perhaps even more interesting is The Invisible Woman — the film Reeves has lined up after the Cloverfield sequel. Variety describes it as “a Hitchcock-style thriller that probes the mind of a former beauty queen who turns to a life of crime to protect her family.” With that angle, The Invisible Woman might just be the project to get excited about.