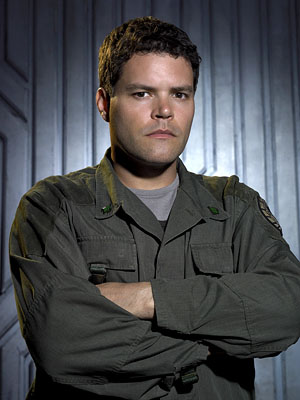 Aaron Douglass — the actor who plays Battlestar Galactica’s Chief Tyrol — has never been soft spoken. When the Season 3 finale revealed that Tyrol had been a Cylon all along, Douglas’ outraged “WTFs” filled the Internet: He felt it cheapened everything the character had been through, and he seemed to feel betrayed.
In a recent Q&A on LiveJournal.com, Douglas gave his opinion about some of the show’s failures.

Like all of us, Sharon’s and Helo’s interminable “running through the woods” scenes on Caprica back in Season One got up Douglas’ nose, and he wasn’t keen on Season Three’s Apollo / Anders / Dualia / Starbuck sexual quagmire. But more interestingly, Douglas gave us some spoilers for the upcoming season, including the detail that Ellen Tigh will return in a slinky red Number Six dress to torment Colonel Tigh and that the last two episodes will feature a massive space battle, possibly between two opposing Cylon factions.