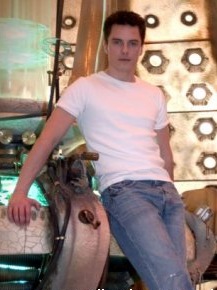 After months of frantic rumor-mongering, it looks like some of the randomly assembled lies I threw up on the front page of SciFi Scanner have proven true: the UK’s Daily Star (the premiere newspaper for the Page 3 enthusiast) has confirmed that Martha Jones and Rose Tyler will return next season to help Doctor Who on his time-traveling adventures.

The confirmation comes from hunky John Barrowman, who plays Captain Jack Harkness, the immortal polyamorous slut who heads up the Torchwood division, where he spends just as much time jamming his tongue down other people’s throats as he does staving off extraterrestrial threats.

According to Barrowman, the Doctor gets blown up next season (!) and needs to rely on Captain Jack and the sextuagenarian has-been Sarah Jane Smith for help. Barrowman claims that Captain Jack will act as the Doctor’s muscle, breaking kneecaps, pulling out teeth and lopping off fingers with a cigar cutter as the Doctor might require. Sarah Jane and Martha Jones presumably fit into this equation somewhere.

It seems to me this is all calculated crossover stuff, to keep us interested in the Doctor Who spin-offs Torchwood and The Sarah Jane Adventures as the parent show goes on a year’s hiatus. Interesting.

Series Four Spoiler In The Daily Star [Bad Wolf One]