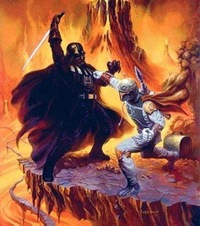 Boba Fett’s rise to fame is improbable, to say the least. With a first appearance in the Star Wars Holiday Special, it seemed like he should be consigned to a career scrounging for money on Mos Eisley. But his machismo charisma and dramatic gravitas shined through, winning him a return appearance in The Empire Strikes Back . From there, his cult of personality grew, until the entire universe had been retconned to be composed entirely of Boba Fett clones.

In short, for a guy with one line in the original trilogy, Fett’s got quite a fan club. Heck, even in the Expanded Universe, they won’t keep him dead: according to Fett’s Wikipedia entry, after he "died" at the beginning of Return of the Jedi , he escaped the belly of the Sarlaac, went on some adventures, got knocked back in, then escaped a second time. A bad muddafugga indeed.

So no surprise that Lucasfilm intends Boba Fett to take a big part in the upcoming Star Wars television series. Producer Rick McCallum has confirmed that Fett will indeed be a featured player. I’m still sort of holding out for a Firefly-like take on the Star Wars universe, and I get a bit giddy to think of Boba Fett as the central protagonist of such a show. It’ll never happen, but it’s nice to dream.